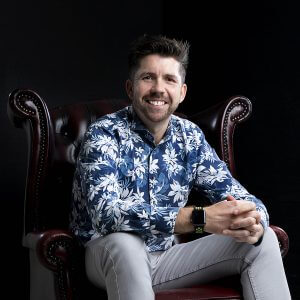 Jonny bought Venture Studios Eton in 2012 from the existing franchisee. Prior to purchasing the studio, Jonny had worked in Venture as a photographer, but he had always wanted to own and run his own studio.

“I’ve built Venture Eton up since I purchased the business. The studio team have worked incredibly hard, and I am very proud to have been awarded the Studio of the Year three times. With turnover averaging £650K a year we have always been one of the best performing studios in the country.”

With a view to expanding his business portfolio, Jonny looked at alternative franchise models predominantly in the well-known fast food markets. “I looked at lots of other franchise opportunities, including one of the largest food franchises in the world……..it was apparent that I would have to spend hundreds of thousands of pounds to open at least two restaurants, in order to get the same return that I do from running one Venture franchise.”

Jonny has recently taken over the Palmers Green studio in partnership with a rising star within his team. “I firmly believe my future lies within Venture, it gives me great job satisfaction as well as the work, life balance I strive for”

Martin & Michelle opened their Southampton studio in January 2012. Before opting for Venture the couple looked at several franchise opportunities in the market. They were open minded to the type of business they would get involved with, but the decision was made for Venture due to the experience that the customer receives.

“The more we looked at the Venture Model, the more appealing it became. Venture provide a unique experience, which creates a product full of emotional value to the customer. Every day we see how thrilled customers are when they see the amazing photographs that we take of their families”

Martin & Michelle were overwhelmed by the support given on opening their studio. “We worked closely with the Venture opening team prior to opening the studio and as you can imagine, it was an incredibly busy time. The key to a successful opening was making sure that we had an effective marketing plan in place in the 8 weeks prior to launch, which subsequently would ensure that we opened on day 1 with a diary full of customer appointments. It obviously worked as we turned over £100K in our first two full months of being open!”

The Southampton studio continues to be a successful studios in the Venture network, turning over an average of £600k per year. “The financial returns of the business have exceeded our expectations and it’s really satisfying to be involved in such a unique and powerful brand”